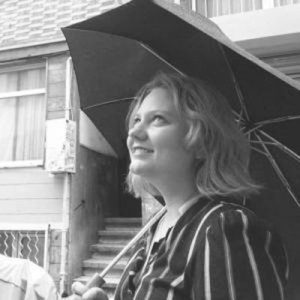 Visit the field notes page for more from this author

Thea de Gruchy is a doctoral research fellow and has been at the ACMS since undertaking her MA in Migration & Displacement in 2013. Her PhD is funded through a Wellcome Trust doctoral fellowship, awarded through maHp, and explores the making and effects of policy around migration and health for migrant farm workers in Vhembe District, Limpopo.

Her PhD and current research, which is supervised by Jo Vearey, funded by the Wellcome Trust and part of the Migration and Health Project (maHp) at ACMS, centres on questions of policy process and asks how policy is made and influenced in South Africa. In 2015 and the beginning of 2016, Thea worked with Ingrid Palmary to answer some of these questions and inform a conceptual framework on how policy is made in South Africa using the Trafficking in Persons Act of 2013 as a case study. Her doctoral work will be using a case study of health and occupational safety policy in the South African agricultural sector to elaborate on and develop this framework.

Thea’s MA, which was funded by the National Research Foundation (NRF), focused on the immigration industry and the relationship between the state, immigration intermediaries, and migrants. Part of this research explored the increasing precarity experienced by immigrants in South Africa as a result of changing and increasingly stringent immigration policy and regulations. Having received a Faculty of Humanities Ad Hoc Grant from the University of the Witwatersrand for 2016 to follow on with some of this research and as part of the Security at the Margins (SeaM) project – a collaborative project between ACMS and the Centre for African Studies at the University of Edinburgh – she continues to be interested in the relationship between policy, specifically policy framed in terms of security, and the precarity of marginalised and vulnerable groups.

Thea currently co-ordinates the PhD Work in Progress seminars that are held on a monthly basis at ACMS.

Responding to the health needs of migrant farm workers in South Africa: Opportunities and challenges for sustainable community‐based responses

This paper highlights the ways in which local interventions that mobilise community members can improve the access that rural, migrant farming communities have to healthcare.

A week of migration & health in Joburg: Where are we? Where do we go?

Last week, the Lancet Commission on Migration and Health’s Report – The health of a world on the move– was formerly launched in South Africa at the University of the Witwatersrand (Wits).

After the handover: Exploring MSF’s role in the provision of health care to migrant farm workers in Musina, South Africa

Using qualitative methodology and a case study approach, this paper traces the development of the Médecins sans Frontières (MSF) mobile clinic programme in Musina, exploring the changing relationship between MSF and the state.

In this article, the authors consider what influenced the development of South Africa’s 2013 Prevention and Combatting of Trafficking in Persons Act (TiP Act) as just one example of migration policy-making.

How Unpopular Policies are Made: Examples from South Africa, Singapore and Bangladesh

Very little is known about what drives policy making in South Africa. This project investigates the making and effects of policy around migration and health for migrant farm workers in Vhembe District, Limpopo.