The first MoVE project I was involved in was titled Volume 44 and a key issue in many of the meetings between the African Centre for Migration & Society and the Market Photo Workshop in the months leading up to the project workshops was around which images and stories produced in the project could be shared with an audience outside the project. These conversations, for the most part, were around ideas related to a distinction between what would be made public, and what should remain private. These conversations around the public and the private were generally held in relation to ideas around the anonymity and safety of participants, and their intellectual property in photographs and stories.

Since Volume 44, Elsa Oliveira and I have worked in collaboration on a few other projects, and we have continued to use this distinction, in part, as an organising principle in those projects. These projects were titled the Sex Worker Zine Project, the Sex Worker Poster Project, and Stitching our [HIV] Stories. The mechanism created through the interfacing of public/private has influenced the way the projects were designed, and allowed for productive conversations between participants-facilitators-researchers in the workshop environments. The notions of the public and the private have been useful, for instance, to help set the parameters of workshop environments in an instinctual, colloquial and metaphoric way. We speak to the participants about the workshop as a learning and reflecting encounter somewhat removed from the outside world, but one that eventually, through the workshop encounter, would produce something which would be for the eyes of the world outside of the workshop space. The ensured anonymity of the participants is the tool we use to be able to create this interface between public/private while we conduct the workshops, but also when we continue the project after the workshops. As facilitators of this public/private relationship, we strategise with participants on how to tell stories and share information with the outside world without compromising their own safety. 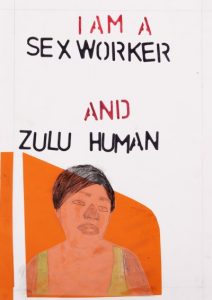 There are obvious differences in researchers coming into an area, and facilitating arts-based participatory workshops, and participants reflecting on aspects of their lives in a friendly space, yet remaining part of a highly stigmatised or brutalised community in their daily lives. As facilitator-researchers we may have a sensitivity to the participants’ lived realities, but we also have a largely peripheral relationship to the issues participants deal with in their lives: one mediated through the project. The projects, however, can create images and information which could place participants in potentially hazardous or precarious situations, situations which facilitator-researchers may not be able to support participants in. The MoVE projects I have been involved in, however, have always been partnered with Sisonke, a grassroots organisation which works with people who sell sex as a means of income. This organisation has a much different relationship to participants than facilitator-researchers can have. Sisonke has the capacity to be involved with participants’ everyday lives, and be involved in the specific challenges its members may face with police, healthcare, clients, and so forth. Since the MoVE projects are engineered in a large part by research interests, the productions that are created through these projects should be mediated through a layer of anonymity, even when those productions could support advocacy. This is important because even though the workshop can create learning opportunities, and moments for solidarity between participants, facilitator-researchers cannot support participants in the challenges they face in their daily lives in the same way Sisonke can.

This is not to say that the interfacing of public/private is a principle we introduce to the participants. Within Sisonke, for instance, it is used in marches when people cover their faces, or in interviews, when people request to remain anonymous. The advocacy training that many of the participants we work with have received through Sisonke, and the advocacy activities they are involved in through that organisation, means that many of our project participants already have a developed sense of speaking outwards towards a cause they believe in, if perhaps, highly influenced by Sisonke’s discourse. In projects such as the Sex Worker Zine Project, the Sex Worker Poster Project, and Stitching our [HIV] Stories, in fact, we were aiming for more personalisation of public facing messages through the proliferation of contextualised stories and issues. 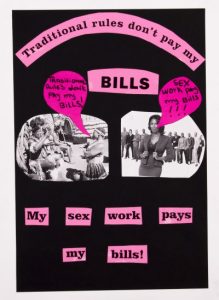 The ambiguity entailed in evoking “the public” and “the private”
While the distinction between the public and the private has been useful to guide our projects, these terms have slippery meanings and convoluted conceptual lineages, and they should be used with caution.

MoVE projects are certainly not the only projects in the world employing this distinction. According to Jeff Weintraub (1997), the distinction of the public and the private has a long history within Western thought, and has consistently been used to consider and order interaction in the world. In his essay titled The Theory and Politics of the Public/Private Distinction Weintraub takes stock of various approaches in recent decades to public/private in different fields. He introduces this essay with the following note:

In Norberto Bobbio’s useful phrase, the public/private distinction stands out as one of the “grand dichotomies” of Western thought, in the sense of a binary opposition that is used to subsume a wide range of other important distinctions and that attempts (more or less successfully) to dichotomize the social universe in a comprehensive and sharply demarcated way.

[… For the rest of this blog post visit, “MoVE projects and public/private distinction“…]

Quinten Edward Williams is a Johannesburg based artist. Arts-based research projects provide him with the opportunity to work with nuanced relationships that are embedded in specific places. Projects such as the Sex Worker Zine Project allow Quinten to expand his art practice beyond the painter’s studio, linking up with social justice movements.