Reflections on the “Analysing Patient Mobility, Migration and Health” workshop

Reflections on the “Analysing Patient Mobility, Migration and Health” workshop

On 20-21 March 2017, maHp researcher Tackson Makandwa presented at the “Analysing Patient Mobility, Migration and Health” workshop, which was hosted by the London School of Hygiene & Tropical Medicine in collaboration with the University of York and the African Centre for Migration & Society (ACMS).

The workshop brought together a group of early to mid-career and established researchers from the UK and Southern Africa to explore cutting-edge research on patient mobility, migration and health. An explicit focus of the event was on methods for analysis of the connection between mobility and health and on Southern Africa as an exemplar region.

The workshop focused on the impact of both communicable and non-communicable diseases on regional healthcare service delivery with Southern Africa as a focal point but also pulling together case studies from other contexts. It reflected on how some key populations are neglected in responses to migration; for example how sometimes the dominant discourse on migration and health centers more on cross border migrants ignoring internal migrants who represent the bulk of regional movements.

Another issue, which was discussed during the workshop, was the policy dilemmas faced by healthcare service providers due to poor harmonization and coordination of policies and systems at a region and national level. A call was made for legislation and health policy to better address migration and mobility issues. One of the shortfalls that were noted to be compromising policy issues in South Africa and elsewhere was the lack of coordination between national and other levels of governance – provincial, district and local levels – as adequate resources are not channeled towards this. Lack of coordination and dialogue between researchers and public healthcare practitioners was another challenge reflected upon and it was recommended that the two work together as partners for research to be meaningful and for research findings and recommendations to be put into practice and action.

Spatial sensitivity was reemphasized as important in doing research and designing responses to migration, especially the importance of engaging with spaces of vulnerability. Although spaces of vulnerability may vary, most presentations engaged more with the urban and cross-border spaces. The focus was on responses to HIV/AIDS and TB, maternal health, policy dilemmas, mobility and the spread of Malaria across borders, and also how internal migrants shift the complexion of health and disease cases in various countries. 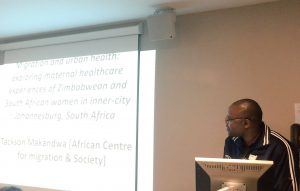 During the workshop sessions, it was agreed that determinants of health were outside the healthcare sector, thus the need for a multi-sectorial approach. It was noted that urban spaces present an important lens and being sensitive to intra urban disparities is very important in determining access to healthcare services. Capturing data on treatment continuity was also emphasized, particularly knowing how mobility in the city can result in healthcare users changing facilities, creating confusion on treatment continuity and defaulting. However, it was noted that mobility can only result in patients changing facilities and not necessarily result in treatment defaulting as widely believed to be the case (of who is accessing health and where). Hence the need to revisit the patient capturing methods to having a system, which can pick up users anywhere they try to access health (e.g. a biometric system).

Migrant homogeneity (vis-à-vis heterogeneity emerged as crucial. The classification of migrants and mobile population as a single group that needs urgent attention was debated as a source of error. Participants reflected critically on the need to focus on population diversity and specific categories within the cross border/internal migrants divide, documented and undocumented categories. Hence the need to focus on sex workers, truck drivers, migrant mothers of reproductive age and other vulnerable groups as of importance and critical urgent need.

Another debated issue during the workshop was that of the cost implications of providing health services to all regardless of documentation status. The point raised was on short-term against long-term benefits of such actions. Related to that was the issue of financing health across the border and it remains a challenge and makes healthcare a problem at regional services. More importantly it was discussed how at regional levels, some countries should be able to provide leadership on migration, mobility and health – with South Africa singled out at leading in Southern Africa.

In another interesting point of discussion was the issue of language in the context of migration and mobility. Language was viewed to have different layers in the context of migration:
(1) What does the language we use as researchers mean to policy formulators or politicians – the idea of figures vs. narratives? What picture does it present to these two critical stakeholders?
(2) Language as a means of communication (does it serve its purpose) – health care providers vs. healthcare users interaction focus?

It was agreed that communication can be viewed as a source of conflict and medical error. The debate even went on to pose questions on whether the challenge is on the reluctance of using English by healthcare providers, or their inability to speak English.

Finally the discussions focused on methodological approaches and their relevance in migration studies. This called for mixed methods approaches to research and also the need for regional comparative studies and disease modeling strategies. This also ended with a take home message and challenge on how best to define migration from various angles (nomenclature).

Tackson Makandwa is a maHp researcher and PhD candidate at the African Centre for Migration & Society (ACMS). He has worked as an assistant lecturer in the Department of Psychology at the Great Zimbabwe University, and as a processing officer in the Ministry of Home Affairs before joining the ACMS.

Under maHp work and for his PhD, Tackson focuses on migration and urban health in Johannesburg, using a maternal health lens – bringing those on the urban and healthcare margins on the spotlight.

0 Comments on "Reflections on the “Analysing Patient Mobility, Migration and Health” workshop"