“Being Seen”: Reflections on an arts-based research project with refugee women in Johannesburg

“Being Seen”: Reflections on an arts-based research project with refugee women in Johannesburg

In South Africa, asylum seekers and refugees who have experienced trauma, face multiple and intersecting vulnerabilities – including challenges in accessing healthcare, documentation, and employment, gender-based violence and xenophobia. Such challenges both exacerbate pre-existing trauma and also create new forms of suffering and risk. While asylum seekers and refugees are encouraged to self-settle in South Africa, this can mean that they often have to negotiate between invisibility and, the need to “be seen” in certain spaces of the city in order to access support and, regularise their stay.

Since February 2017 myself and a colleague have been working with a small group of refugee women who live in inner-city Johannesburg. Referred to us via a local psychosocial NGO, the women all agreed to be participants in an arts-based research project exploring the experiences of women who are migrants and mothers in Johannesburg. The participants are asylum seekers from the Democratic Republic of Congo (DRC), Burundi and Rwanda and have arrived in South Africa over the past ten years (the most recent was last year) having fled war and violence in their home countries. They all crossed many borders on their journeys to South Africa in the hope of finding safety and more secure lives. All of the women are mothers to young children and are parenting alone – their husbands have either been killed, gone into hiding or are simply absent.

The group meets every Friday morning for three hours at the NGO offices where we have our own quiet space. All of the women are currently receiving counselling from the NGO, and many of their children do too. The traumas of living through and witnessing war, loosing loved ones again and again and, negotiating everyday life in South Africa run deep. In many ways the challenges and forms of violence faced in Johannesburg trigger and revive these traumas of the past. Life as a non-national in the inner-city is precarious and can be frightening, as one of the participants Mary told me:

We hid from the rebels…now we hide from the tsotis who want to kill us because we are foreigners. 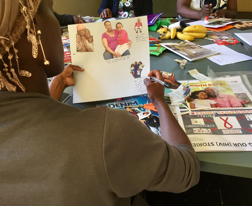 While many of the women have endured horrific experiences in their home countries and on their journeys to South Africa it is often what is going on here, in the inner-city – in the clinics and hospitals, the queues at Home Affairs and on the streets – that is the most shocking. Shocking, not because we haven’t heard these stories before, but shocking because they continue and get worse – and because migrant mothers in particular have to find ways to negotiate, to strategise and to fight against multiple forms of structural and direct violence.

Daily the women have to work out where they can be seen and where they need to stay invisible, where they can make demands and hope for assistance, and where they know they will be told they are not entitled or deserving. And quite often that comes down to the attitude of one or a few individuals on any particular day. Whether it is a Home Affairs official that helps you renew your Asylum papers or whether he or she decides to tell you that “there is no more Asylum in South Africa” and that you will be deported; whether a doctor decides to give you a proper check up or whether they refuse to make eye contact and tell you “I have no time for all of you foreigners why can’t you go back to your own country?” and, whether the police checking your papers on the street decide that it is legitimate and allow you to go, or screw it up and ask you “what is this on the photograph – is it you or is it a monster?” (as experienced by the women in our group). It is often the very people that the women turn to for assistance that treat them with disrespect and abuse, preventing them from making their everyday lives work, and from “being seen”. 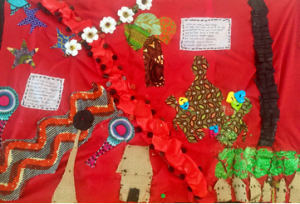 Stories and realities of (not) being seen

In one session the women began a discussion about accessing healthcare and dealing with doctors. Miriam mentioned how she had tried to see a doctor for nose bleeds she was experiencing. She described, “he (the doctor) sat and didn’t look at me once…he asked me questions but he never even looked at me. He was looking at his phone. He didn’t check me and he spoke in Zulu. I don’t know Zulu”. She compared this to a doctor in a private practice that she had eventually seen (facilitated by the NGO where she gets support). “That doctor treated me like a human being” she said, “he checked everything”. She went on to say:

It didn’t even matter if the medication didn’t work, just because he looked at me and saw me and spoke nicely to me asking me all about my life I felt better. In the taxi on the way home I felt better and I hadn’t even taken any medication.

A few weeks earlier Precious had described another healthcare encounter when she had gone to Baragwanath hospital (in Soweto) to pick up an appointment card to see a psychiatrist. The appointment had been arranged and all she needed was the card so that she knew when to attend. On arrival she had asked a nurse where she could collect the card. The nurse then turned and said to her (as recounted by Precious):

You need to see a psychiatrist? For what? Trauma? You don’t have trauma – I have seen trauma before. You are not traumatised. If you have problems with your husband go sort it out, don’t bring it here, we are not for you people to bring your problems.

What followed was an onslaught of abuse from the nurse leaving Precious in tears. Another nurse tried to apologise to Patience and a security guard tried to intervene.

These stories weave into the overarching narrative of daily discrimination and abuse faced by non-nationals in South Africa. Many experiences of being denied access to healthcare, or charged where healthcare is free (at Primary level), or abused during treatment, saturate an already charged context of extreme inequality, disparities and anger. For migrant mothers the stories are particularly bad – Mary described how her newborn baby was “thrown” onto her bed after birth and how the nurses refused to assist with filling in the birth certificate, leaving the child undocumented. She also described how her friend from the DRC lost a child after the nurses said they were too busy to deliver, and so when she gave birth alone  the baby fell onto the floor and died.

Such experiences blister the surface of the realities of surviving in the city – and though individuals manage, they get on and they move on – these experiences often shape what it is to be a migrant, and to be a mother in Johannesburg. Yet, at the same time they do not define who the women are and, are not the only realities they experience. Their lives – like many lives – are complex, multifaceted and multilayered. But through sharing stories about being migrant mothers in the city these are the stories and realities that are narrated and described every, single week in our group. Stories and realities about (not) being seen.

Whether it is in a small group on a Friday morning, in their counselling sessions, with the doctors who treat them or the Home Affairs officials who decide whether they can stay (or how difficult to make staying); these spaces and moments of being seen matter. The women ask to be seen in the ways that are available to them and they ask for the spaces where they will be listened to. And of course, more than this, through being seen they ask for things to change and for something definite – something more than hope, than of sharing stories and of nice words – to be offered to them. And that is the most challenging part. 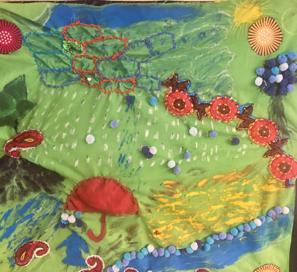 The research for the group is funded through MaHp, Security at the Margins (SeaM) and a “Life in the City” post-doctoral fellowship with the Wits School of Governance, and hosted by the African Centre for Migration & Society (ACMS).

Becky Walker is a research associate with the African Centre for Migration & Society (ACMS).

In 2010 Becky moved to South Africa to take up a Postdoctoral fellowship with the Centre of Indian Studies in Africa (CISA) at Wits University and also taught Gender and Development as a sessional lecturer in Social Anthropology. In 2013 she then was awarded a Wotro-funded postdoctoral project through ACMS that explored the multiple vulnerabilities faced by migrant sex workers in Johannesburg.

The project considered the impact of migration legislation, trafficking discourses and transnational networks on feelings of belonging amongst migrant sex workers in Johannesburg and Amsterdam. It also drew from an innovative arts based participatory project that Becky and a colleague ran in a women’s shelter in inner-city Johannesburg, and on-going research at ACMS into sex work, migration and trafficking. Becky’s current work builds on the Wotro project to explore the vulnerabilities faced by migrant mothers who sell sex in South Africa with a particular focus on the intersections of mothering, being migrants and selling sex and also, challenges encountered such as access to healthcare, stigmatisation and discrimination.

Becky has published widely from her research including a articles and chapters on everyday violence, sex work, trafficking and migration and sex work and motherhood.

0 Comments on "“Being Seen”: Reflections on an arts-based research project with refugee women in Johannesburg"