The Future of Artisanal Mining is Clouded in Dust and Smoke

The Future of Artisanal Mining is Clouded in Dust and Smoke

The future of artisanal small-scale (ASM) mining in South Africa rests on a legal and existential precipice; its very definition is clouded in dust and smoke. It holds the potential to sustain livelihoods and contribute to development in poor communities, and yet is a continuously hazardous enterprise, often precarious and on the boundaries of the law.

These were the key themes emerging from a workshop held at the University of the Witwatersrand on the 10th November – co-hosted by the Migration and Health Project (maHp) of the African Centre for Migration & Society (ACMS) and the Centre for Sustainability in Mining and Industry (CSMI) – which focused on ASM in South Africa, though addressing it in a global context.

The workshop highlighted the intense need for more research and understanding on the issue; the legal murk in which the occupation is mired; the health and environmental risks of ASM, along with its possibility for community development – all in conjuction with the widely divergent ways in which ASM is (mis) understood.

“As in many countries in Africa research on ASM is limited, as such a lot of discussion and debates around ASM are in most cases misinformed and are not supported by ground level evidence” said Pontsho Ledwaba from CSMI, opening the workshop.

Nellie Mutemeri, an expert on small scale mining in Africa, and a professor based at the CSMI gave the keynote address.  Her key message was: “Mainstream ASM, don’t ghettoise it.”

Mutemeri highlighted that ASM in itself, in spite of its widespread associations in South Africa with criminality, did not denote a legal or illegal activity. ASM could be legal, illegal, or extra-legal (the latter where no adequate regulatory frameworks exist).

Her point highlighted a critical gap which was raised throughout the conference: while some actors addressed ASM in terms of formal small-scale mines and saw illegal mining as a problem, others were primarily concerned with the risky livelihoods of those working illegally.

The Landscapes and Legality of ASM

The first panel on the “Landscape, Challenges and Opportunities of ASM” included state, and non-governmental organisations. The panel highlighted the tensions between formal and informal ASM, along with the legal ambiguities around ASM in South Africa.

Gad Kwata represented the Department of Mineral Resources, Small Scale Mining Directorate. Kwata viewed ASM as critical in sharing the dividends of mining with historically disadvantaged communities. He highlighted the role the state could play in fostering small-scale mine and gave examples like the women-led Mzintlava Quarry, in Lusikisiki, in the Eastern Cape.

“Some people see small scale mining as a risk. But I don’t see it as a risk, it’s like any business, you have to look after it,” he said, “Our mission is we need a viable project and to increase the economy of the country.” He said a major challenge was a lack of funding.

“At the end of the day we see people mining illegally because we don’t have funding,” he said, “illegal mining is a problem in the country.” 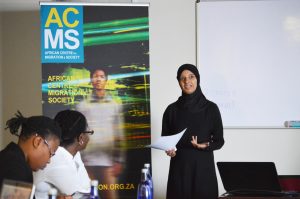 Naseema Fakir, representing the Legal Resource Centre (LRC), argued that the legal definitions regarding ASM were ambiguous. She pointed out that artisanal miners are often persecuted and arrested for infringements like trespassing, but not mining as such.

She also highlighted that the challenges facing artisanal mining need to be contextualised within the longer history of mining under apartheid and colonialism.

“We tend to forget about apartheid and the colonial impact on resource distribution,” said Fakir, “In order for us to develop a framework to deal with ASM, this history can’t be ignored.”

Claude Kabemba of Southern Africa Resource Watch highlighted the lost benefits to states who ignore ASM. He said of ASM: “It employs and feeds many sectors, but also produces revenues that the state does not capture.”  Kabemba argued that current informality of the sector exposes the sector to criminality. The sector is captured by criminal cartels who have robbed this sector, he said.

The Hazards and Hopes of Artisanal Mining

Panel Two focused on the “Health, Safety and Environmental Aspects of ASM.” Sizwe Phakathi of the Chamber of Mines spoke personally and powerfully about his doctoral work on artisanal coalmining in the community in which he grew up near Blaauwbosch, Kwazulu-Natal. He said his research was “a way of ploughing back into my community. These people have been mining coal, taking their kids to universities.”

He invoked the ways in which artisanal mining brought together members of the community across generations.  “There was a lot of presence of grannies,” he observed, though also, of concern, some children were involved.

He explained that although the community lack mining licences, they regard the land as ancestral or traditional land and therefore feel an entitlement to mine it. He said the miners wish to formalise their work, in order to modernise it.

The presence of injury and death remain a constant concern. 78% of his respondents know of fatalities in the mining. In spite of the hazards, they would not close the mine and are attached to it as a source of livelihood.

Cecelia Johnson, a freelance reporter, spoke to her article in GroundUp on the “lethal toll of informal gold mining”. Johnson raised how the injury and death toll from ASM was rising at the same time that those in large scale formal mines was falling. In particular, she highlighted that violent deaths from “turf wars” and “murder” were on the increase.

Zaheera Jinnah from ACMS spoke to ongoing research on artisanal mining undertaken by the maHp project on the West Rand of Johannesburg. Jinnah reiterated the lack of a strong knowledge base for artisanal mining. With reference to the case of the zama-zamas as the informal miners are known, Jinnah argued that artisanal mining needs to be addressed in terms of a livelihood approach which illuminates “invisible spaces” (spaces often outside state and NGO service provision). In such spaces there is often a highly ambivalent relationship with the state and police, in particular where foreign nationals are involved.

She highlighted the risks facing women involved in the artisanal mining process in particular their exposure to mercury and dust, along with the risks of transactional sex.

She also argued that although artisanal miners were not exclusively foreign nationals, many cross border migrants find themselves working in ASM in low-paying, highly precarious jobs and are often exposed both to health risks and to police persecution.

In addition, Jinnah re-iterated that the hazards of artisanal mining need to be viewed in relation to the longer history of mining in South Africa.

The final keynote was given by Meshack Mbangula of the Mining Affected Communities United in Action (MACUA). Mbangula insisted the mining communities directly affected by the dangers of mining need to take the lead in addressing these concerns. He said that MACUA was seeking to capacitate these communities.

The debates of the workshop highlighted how much is still unknown about artisanal mining, and how much work is still needed in addressing the hazards and hopes of those who labour in this in this mercurial industry.

Matthew Wilhelm-Solomon is an Associate Researcher on the Migration and Health Project Southern Africa, based at the African Centre for Migration & Society at the University of Witwatersrand (Wits).

Matthew holds a doctorate from the University of Oxford, which was ethnographic study of HIV/AIDS treatment programmes to displaced communities in northern Uganda. Over the past five years he has conducting research in inner-city Johannesburg on themes of migration, religion, health and housing. He is beginning new research looking at African migration to Brazil.

Matthew has published widely in different books and journals including Medical Anthropology, Critical African Studies and the African Cities Reader, and a number of newspapers and journalistic publications including the Mail & Guardian, Sunday Times, Chimurenga Chronic and the ConMag. He is the lead editor of the book 'Routes and Rites to the City: Mobility, Diversity and Religious Space in Johannesburg' to published by Palgrave-MacMilllan.