The zines from the Sex Worker Zine Project are powerful visual and narrative accounts of personal struggles and successes, everyday realities, beliefs, hopes and dreams. These visual stories are crafted around aspects of participants’ lives that they wanted the public to know about. The zine workshop process was intended to create opportunities for participants to reflect on their lives through a storytelling process that involved visual production. The narrative form was a primary aspect of the workshop because we used it to start a reflective process with the participants, and open areas for participants to explore using visual approaches to art making. It would seem, then, that the relationship between image and text is an important aspect to consider regarding meaning making in the zines. 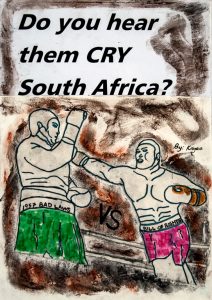 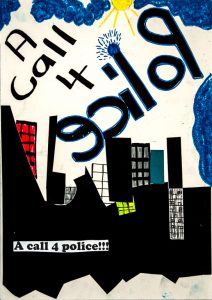 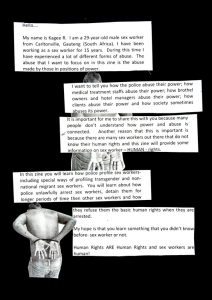 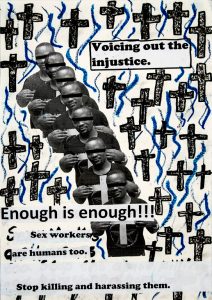 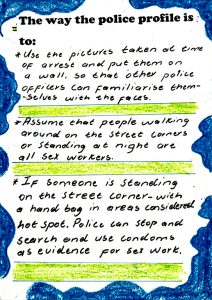 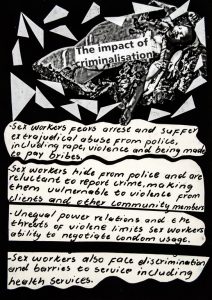 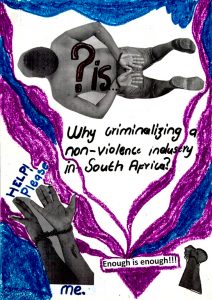 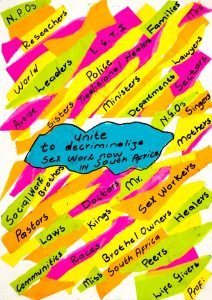 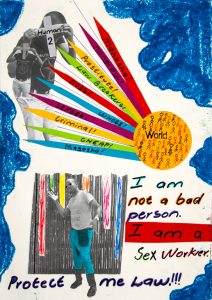 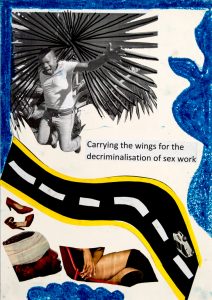 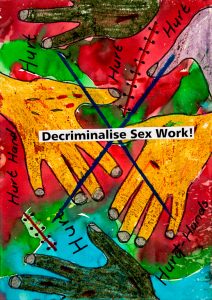 Meaning making through relationships of image and text
Roland Barthes theorised an analytical system that can be used to interpret the creation of meaning in an image. In his his essay Rhetoric of the Image Barthes (1977) is interested in the way images are able to function as rhetoric devices, in the sense that they can have influence over people. Teasing out this interest, Barthes considers various types of messages that may create meaning in images. Barthes analyses an advertising image, because he reasons that if any images have messages attached to them, it would be advertising images. In his analysis, Barthes considers the photographic image, the drawing image, the relationship of images and text, and the effect of the simultaneous presence of denotative, and connotative messages in images.

The photographic image, in Barthes system, functions different to the drawing image. The drawing, in this framework, is a coded message because in order for the drawing to represent an object or a scene, it requires a rule-governed transposition. The drawing, as opposed to the photograph, is not an essential or objective recording of a given subject matter, but a transposed code that is based in context and is created through division and selective presentation between what is seen as significant and insignificant. Even though a drawing does not reproduce everything seen by the eye, the drawing intervenes in the object through a transposition, and therefore, creates a strong coded message. This transposition is the creation of a style, and interpreting this transposition requires learning the codes of drawing.
According to Barthes, however, the photograph does not intervene within what is photographed. Although a photograph may be constructed through a series of choices, both conceptual and technical, the photograph presents a piece of nature that has been recorded through an automatic process. The actual photograph, for Barthes, is a message without a code. It is a denotation of something that was in a specific space, at a specific time.

Since photographs, however, are constructions that are based on a series of choices, and are read by a public within a system of codes out of which meanings arise, they also contain connotative messages. These are sets of learned signs that are contextual associations to the photograph.

Working with linguistic and iconic messages
The denotations, and connotations of images are related to the interplay of two types of meaning making structures associated to images, namely a linguistic structure and an iconic structure.

The linguistic message operates to clarify ambiguity in images through the use of text. A linguistic message can function as an anchor of meaning, or a relay of meaning. When text elucidates, accentuates or rationalises a set of connotation already given in the image, it functions as an anchor of meaning. The anchored meaning directs the reader to a particular association that can arise through the image, as opposed to others. When text invents, produces new significations, or expands on the aspects of the image beyond the connotations already associated to the image, it functions as a relay. When text functions as a relay of meaning, it stands in a complementary relationship to the image. Image and text provide different meanings, but through the story or anecdote that results in this pairing, creates a unity of meaning at a higher level. The linguistic message, however, is a technique to limit meanings in an image, in the sense that certain meanings are chosen, and others are ignored.

In Barthes’ framework, meaning is created independently in the literal messages, symbolic messages and linguistic messages, but also interdependently between them. It is the interrelationships of the three messages, however, that create the final structure of the image.

Interpreting the zines through image and text
The process we followed in facilitating the zine workshop emphasised narrative and visual production as approaches that open areas for reflection and expression. This process was documented in the reflection titled Facilitators’ Notes on the Process (Oliveira & Williams 2016) that appeared in the Sex Worker Zine Project Publication, and I have written about the workshop space in general in a blog entry titled The Workshop as an Ephemeral Assemblage (Williams 2016). In this blog entry, however, I am thinking about the zines as visual forms in terms of image and text.

The sex workers’ zines can be considered to be composites of image and text. Zines that are used in advocacy, such as the sex workers’ zines, depend on the continuous interplay between images and text in order to promote particular messages. The images of the zines are photographs from magazines, newspapers and internet sites¬, personal photographs, cut out paper forms, and also drawn or painted forms. The text that is present in the zines are participants’ written headings, stories and anecdotes, but also text from found sources. Iconic messages, and their relationship to linguistic messages, therefore, were an important aspect of the zine project, and analysing the relationship between image and text in the zines can offer insights into the particular meanings the visual stories may offer.

The zines are filled with linguistic messages. These messages relate to a wide variety of subject matter such as health, sexuality, gender, safety, law, power, parenthood, morality and money. Although there are many instances in the zines artwork pages where the narratives and unexpected juxtapositions between image and text expands on or supplements meanings that can be understood by viewing the image or reading the text alone, images in the zines were generally crafted to create a linguistic message that relates to a specific issue. The relationship between image and text throughout the page sequences of the zines tends to be one where specific connotations that may already be present in that association of images are highlighted. The use of text in the zines is primarily concerned with clarifying or reinforcing the connotations that can be understood by viewing the images because the zines were intended to function as advocacy messages regarding specific concerns.

Approaching the zine artwork pages as drawings allows the reader to understand the zines as intricately crafted visual stories that sometimes manages to imbue text with image. The participants created a range of coded messages about aspects of their lives by creating transpositions of meaning through a drawing process. In this sense, even though linguistic messages that anchor or relay meaning in images can be clearly identified and extracted from most zine artwork pages, the use of some text in the zines could possibly be approached as secondary to coded iconic messages that are based in particular visual styles.

How much meaning are we reading into the zine image?
There are a few considerations to make if an analysis of the image-text messages contained by the zines is conducted through the framework proposed by Barthes.

The intentionality of the image in its relationship to text, and the level of control by the image-text maker, for instance, is something to keep in mind. Barthes chose to analyse an advertising image because these types of images are carefully crafted by professionals to transfer specific messages and influence people’s actions. While the image and text relationships of the zines were carefully crafted by the workshop participants to inform a public on an issue as a type of advocacy, there are many aspects of the zine artwork pages that may have been made by accident. Perhaps a certain mark over a photograph was an artistic gesture not revisited or considered. It is conceivable that some image and its associated text might have been left alone as finished at a point when a participant temporarily lost concentration or interest in the workshop. While this type of image would hold meaning, it would not be accurate to suggest all aspects of the zine artwork pages to be rigorously considered by the participants.

A second consideration to have, if using Barthes’ framework to analyse the zines, is the effect of context in the meanings that are made through the image. The zines were made in workshops that were conducted in two very particular places in South Africa, namely Nelspruit and Makhado. Some of the connotations participants may have had when constructing the image-text relationships of the zine artwork pages will not be accessible to a researcher at first sight. It seems important, therefore, to interpret the zines in reference to the context in which they were made: the workshop space, the towns, the broader cultural areas, and various practices and code systems. The insights gained through a visual analysis, for instance, may be interesting to follow up, explore and expand through the use of narrative interviews.

Lastly, I believe that one should consider whether Barthes’ framework provides enough scope for the interpretation of artistic images as forms that have an influence on the body. The zines were created through an energetic working process that emphasised personal expression through storytelling and visual production. This process managed to hold the interest of the participants, and it created the possibility for participants to craft intricate visual stories. The zines are objects that have a particular form and are made in a particular place, they are intriguing, are inviting to page through and can open interaction in various contexts. However, even though the messages in the zines are powerful, a pure visual analysis would likely read relationships into the zines that were not entirely intended. Although the conception of a linguistic message in a relationship to an iconic message may provide insights regarding the messages contained in the zines, interpretation of the zines could also be approached through affect, a concept that concerns the relationship of form and assemblage, to body. Analysing the zines through a material semiotic approach would give opportunities to think about these objects in terms of their influence on the body, and their participation in an assemblage, beyond the intentionality of the specific messages contained in the zines.

With these considerations in mind, however, I believe that the framework that Barthes presents for analysing the creation of meaning in images provides a range of conceptual tools for a researcher to interpret the visual stories crafted in the zines. These concepts can assist a researcher in developing an understanding of the zines as constructions of image and text that carry messages about particular issues, and which can influence a reader’s future actions.

Quinten Edward Williams is a Johannesburg based artist. Arts-based research projects provide him with the opportunity to work with nuanced relationships that are embedded in specific places. Projects such as the Sex Worker Zine Project allow Quinten to expand his art practice beyond the painter’s studio, linking up with social justice movements.

0 Comments on "Reading the Zine Image"